Todd Howard to Be Inducted into AIAS Hall of Fame

Todd Howard, Executive Producer and Game Director at Bethesda Game Studios, will soon become the Academy of Interactive Arts & Sciences 22nd Hall of Fame recipient. Howard has created some of the industry’s most successful games by pioneering open-world gameplay. He has been integral in the creative direction and growth of such well-loved franchises as The Elder Scrolls and Fallout, which have been recipients of numerous D.I.C.E. Awards throughout the years. Both The Elder Scrolls and Fallout are known for their experiential approach to world-building and storytelling. The scale of their open worlds, variety of questlines, and near-endless cast of characters has ensured no two players have the same experience.

“The Academy is thrilled to be honoring Todd Howard as our next Hall of Fame recipient during our 20th D.I.C.E. Awards celebration,” said Mike Fischer, president, Academy of Interactive Arts & Sciences. “I know that many of us in the industry have spent countless hours enthralled in the vast, open worlds that Todd has created. He’s made us all reconsider the player-game relationship and extended the storytelling possibilities of our medium. We look forward to honoring Todd and celebrating his achievements and contributions to the videogames industry.”

The 2017 Hall of Fame Award will be presented to Howard during the 20th D.I.C.E. Awards ceremony on Thursday, February 23, 2017, at the Mandalay Convention Center in Las Vegas by his longtime colleague, Pete Hines, Vice President of Public Relations and Marketing, Bethesda Softworks.

“Todd’s impact on his studio, our company, and the gaming industry as a whole has been truly remarkable,” said Pete Hines, “When you look at the very best game developers of all time – the 21 members of the AIAS Hall of Fame – I think Todd deserves to have his name right alongside of them as the best of the best.” 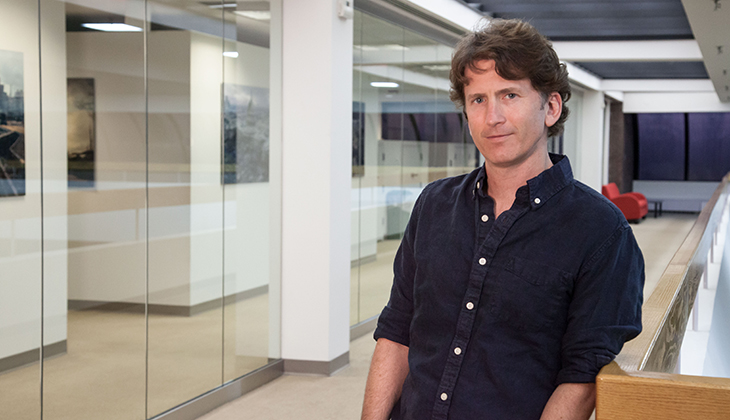 The Fallout series was similarly a rare combination of critical and commercial success. Howard served as game director and executive producer of Fallout 3 (2008) as well as his latest game, Fallout 4, which was released in 2015. Howard employed player-driven narrative to create a game that’s both massive and personally affecting. Fallout 4 received Game of the Year at the 2016 D.I.C.E. Awards. Howard also directed Fallout Shelter, the studio’s first mobile game, which quickly became the #1 App for both Apple and Google, and also won Mobile Game of the Year.

Among the many numerous career accolades already presented to Howard, he is the 16th recipient of the Game Developers Conference Lifetime Achievement Award. GamePro magazine named him to the Top 20 Most Influential People in Gaming over the Last 20 Years. He received the D.I.C.E. Award for Best Game Director in 2012 and 2016. In 2014 he received the Lara of Honor, Germany’s lifetime achievement award for gaming.

“Todd is revered by legions of fans not just for his creative leadership over the years but for his humility and humor,” said Ted Price, CEO and founder, Insomniac Games and vice chairman, Academy of Interactive Arts & Sciences. “Despite the fact that he’s helmed several of the most successful franchises in the history of our industry, he consistently defers praise to others and is the quintessential team player. Yet it’s Todd’s vision and strong direction that has brought Tamriel and the Commonwealth to life for millions around the world. I’m in awe of his accomplishments and am proud to call him a friend. I can’t think of anyone who deserves this honor more than he does.”

The AIAS Hall of Fame honor is bestowed on game creators who have been instrumental in the development of highly influential games and moving a particular genre forward. These individuals demonstrate the highest level of creativity and innovation, resulting in significant product influence on a scale that expands the scope of the industry. Past AIAS Hall of Fame recipients include: Hideo Kojima (2016), Leslie Benzies (2014), Dan and Sam Houser (2014), Tim Sweeney (2012), Dr. Greg Zeschuk (2011), and Dr. Ray Muzyka (2011). Additional Hall of Fame honorees can be found at: http://www.interactive.org/special_awards/index.asp.

Tickets to the 2017 D.I.C.E. Summit and 20th Annual D.I.C.E. Awards can be purchased at www.dicesummit.org.