Updating the Windows 10 operating system is an extremely important process by which users get access to many different improvements, fixes and functions, but here’s Error 8024402f in the Update Center may be in your way of doing this process.

Error 8024402f appears exclusively in the Update Center when the user attempts to check for new updates from Microsoft or when they try to install them. The code 0x8024402f is not a new problem: it could be seen on other operating systems like Windows 7 and Windows 8, but there it appeared as an update error 8024402f (there is not enough zero and X). However, in their essence – these are two identical errors.

How to fix 0x8024402f error on Windows 10? To do this, we have compiled this article, which will set out a lot of different ways to fix the problem. There are a lot of ways, and we will try to describe in our material the most effective of them. We recommend that you try them all, and preferably in the order in which they are located below. So, let’s get started. 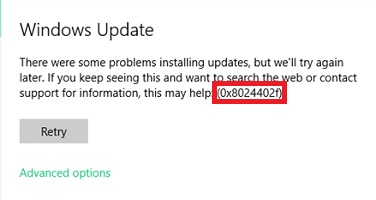 You’ve probably started looking for ways to solve the 0x8024402f error in Update Center as soon as it appeared before you. However, we have one small, advice, which, perhaps, will save you from the arising problem in the shortest possible time. Try to simply reboot your computer.

As we all know, the Windows operating system (and any other operating system) is an extremely complex “organism”, in which often there can be some errors, bugs, glitches and other troubles. Nevertheless, they are solved almost always with the help of a normal computer restart. Try and you do it, and then go back to Windows Update to check for the error 0x8024402f.

Method # 2 Switch to the cable

The next method is almost exactly the same in complexity, as the previous one. Some users note that the error 0x8024402f in the Update Center may occur because of the wireless connection type. If you are using a router to create a Wi-Fi network in your living room, we recommend that you try to connect your computer to the network using a wired connection. You can also try to restart your router: it could start to malfunction. As soon as you change the connection type, go to Update Center again and check if the error 0x8024402f is present.

Method # 3 Updates for other Microsoft products

In the advanced settings of Windows Update there is a special option, the inclusion of which can save you from 0x8024402f code when updating the system. This method has proved to be quite effective among many users, so you, too, may be able to help.

So, you need to do the following series of actions:

Just ticking is all that is required of you. Open Windows Update and try to check for new updates and install them. Error updating 0x8024402f still disturbing you? If so, then let’s move on.

Method # 4 Disabling an antivirus and the Windows Firewall

Antivirus software provides users with an irreplaceable functionality that ensures the security of your operating system from all sorts of virus attacks. The firewall, in turn, regulates the network connections created in the system, both outgoing and incoming.

However, it was these utilities that could cause the error 0x8024402f to appear in Windows Update. How? Anti-Virus could block some update files downloaded from Microsoft servers or system files, resulting in a failure in Windows Update, which made it impossible to install updates. The firewall, in turn, could block the network connection that is required to communicate and download updates from Microsoft servers, which could also cause a 0x8024402f update error.

How to disable Windows Firewall

Windows firewall disable is pretty simple, as you could already be sure. Go to Windows Update and try installing updates. If the error is 0x8024402f, then it really was in the Firewall, which somehow blocked the connection to the Microsoft servers. If it is still present, then let’s move on to disabling the antivirus.

How to disable Windows Defender

Everything is extremely simple, in fact, as in the previous case. If you have a third-party anti-virus on your system, you must also disable it. We can not describe the exact steps for this, but you will be able to apply the above instructions to Windws Defender for your antivirus.

Go to Windows Update. Is there a 0x8024402f error when checking for the presence or installation of updates? If so, we continue to follow the methods for solving the error 0x8024402f.

Windows Update will work correctly only if its service is started and has not been stopped in the event of some event in the operating system. Error 0x8024402f may be a signal that the Windows Update service has been deactivated or its work has been suspended.

You must go to the properties of the Update Service and run it if it was turned off. The process is incredibly simple, and we will now show you how to do it. Follow the steps below:

To clear this folder, you will need to take the following steps:

Cleaning this folder is one of the most effective ways to solve the 0x8024402f error in Update Center. Surely, the problem has already been solved. However, if not, then you can try another method that will definitely be able to fix problems with the Update Center.

In the network, you can find a bunch of different “batch files” that contain commands for resetting. Now we will give you a series of commands to create a .bat file. All you need to do is insert the following commands into the most common text file, change the extension to .bat and run it, and then the automatic update center will start automatically.
And here are the same commands:

After resetting Windows Update, restart your computer, and then go back to the Center to check for an update error 0x8024402f. This time, the error must be solved, and you can safely perform the system update.

Note: if this also did not help (which is rather strange), then we can only recommend you to use the system recovery tools: restore point, system reset, restore using the installation disk, etc.