KERNEL_DATA_INPAGE_ERROR is a blue screen of death, capable of appearing on all versions of the Windows operating system. This critical failure is a potentially dangerous situation, as it could occur because of problems with your hard drive. What exactly problems with the disk are we talking about? Well, this BSoD could have arisen because of the damage to some sectors on the disk, due to poor contact with the SATA connector, a damaged loop connecting the HDD and the motherboard, or due to damage to the SATA connectors themselves.

However, as it was already possible to understand, the reasons vary in their severity, so, perhaps, not everything is so bad. It also happens that this situation arises from the banal lack of space on the hard drive. Among other things, the blue screen of death KERNEL_DATA_INPAGE_ERROR could appear for a number of reasons completely unrelated to the hard drive. For example, to call this BSoD could RAM, connected to the system of the device, viruses (yes, and such can be), lack of necessary updates for Windows, etc. etc.

So, after reading the above material, you probably could get to know what the blue screen of KERNEL_DATA_INPAGE_ERROR’s death is. It’s time to start fixing it, right? 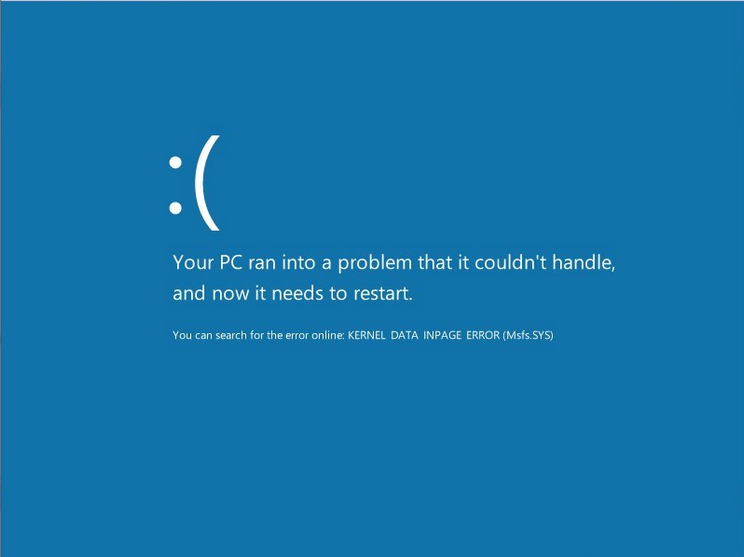 First, we need to point out to you the following: you can execute methods in any order, since there is no clear connection between them. Due to the fact that the blue screen of death can permanently block access to the system, some of the methods you will need to perform with the Windows installation media and the Recovery Environment on it. So, let’s see …

We hope that this material helped you in solving the blue screen of death KERNEL_DATA_INPAGE_ERROR, or at least gave the right direction in which you need to move to solve it.