In this The Evil Within 2 Guide, we will share with you some important tips on the game, namely advice on fighting with enemies, hide and seek from them, talk about best weapons and how to successfully hide from enemies.

So, first you need to understand one simple truth: everything in The Evil Within 2 wants your blood. In the game there are also NPCs, with whom you can chat and find useful information or take a quest, but most of the population in the quiet town of Union wants to kill you. So you have to shoot a lot and hide.

The Evil Within 2 Guide 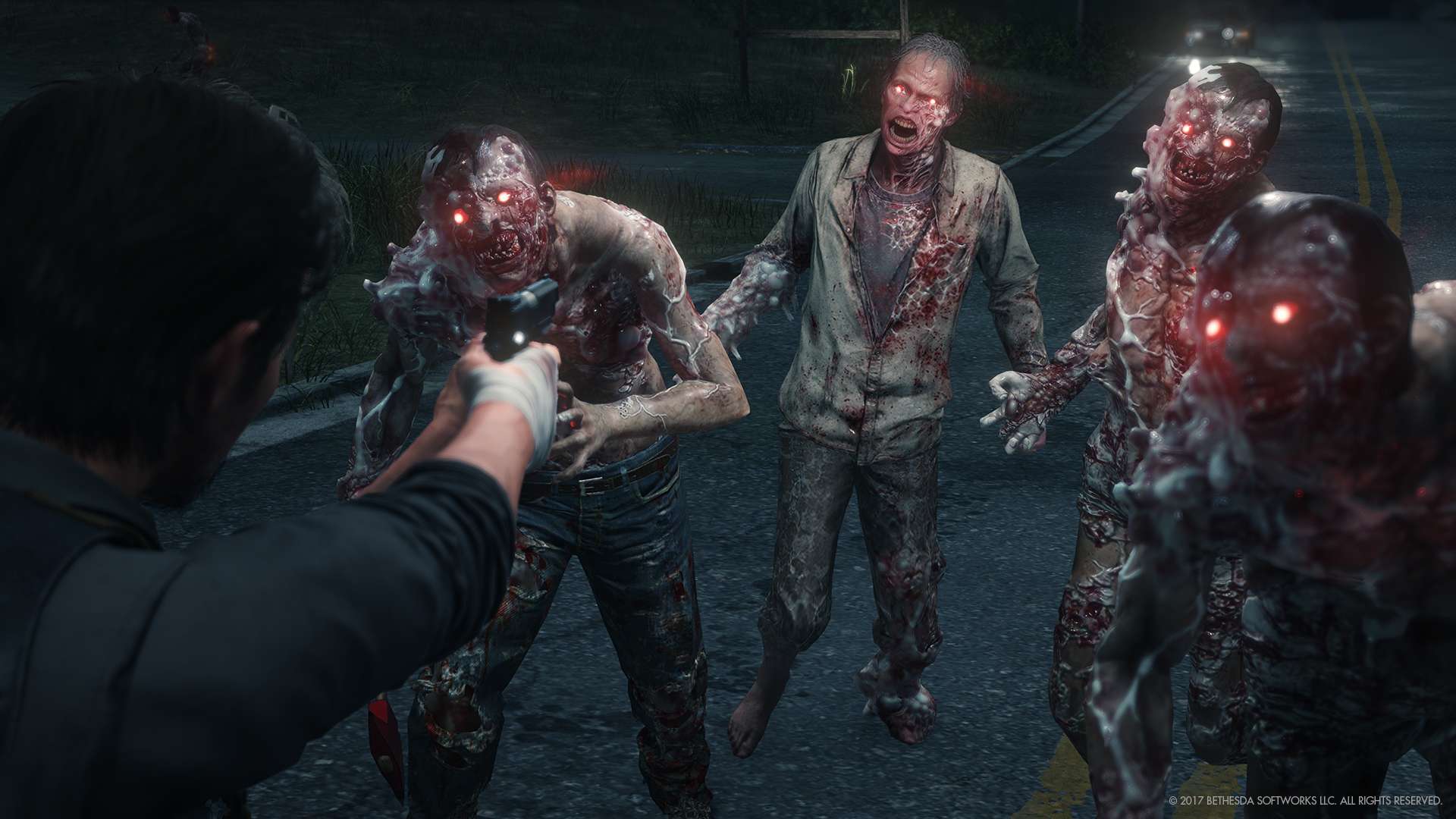 The Evil Within 2 Guide : Stealth

You will spend a huge amount of time in The Evil Within 2 in an attempt to hide your presence from the numerous opponents of the game world. Often, you can not so easily take and run along the next street or road, as the opponents will be scattered almost everywhere. Moreover, your enemies, in spite of their rather unhealthy appearance, are incredibly strong in hearing and sight.

However, throughout the game you can find beautiful hiding places, for example, parked cars, rubbish pockets, boxes or even bushes that will help you stay unnoticed. Plus, you also do not need to anticipate, see or hear your opponents. In the interface The Evil Within 2 there is a convenient indicator that notifies you of the state of awareness of opponents, in the form of an eye at the top of the screen.

In addition, The Evil Within 2 also has several skills that will help you be more secretive. For example, in the skills branch, you can find a skill that will help you move much faster in a crouching position. Yes, the initial speed of movement in this position is tolerable, but sometimes you want Sebastian, the main character of the first and second parts of The Evil Within 2, to move a little faster.

I also want to mention subjects for distracting the attention of opponents. Unlike the previous part, objects of distraction, for example, bottles, now work as it should and you can rely on them. As soon as you are going to throw a certain object, the zone will appear on the screen, into which the object will land and even on which area its landing will be heard. Very convenient and practical.

The Evil Within 2 Guide: The Best Weapon

In the game The Evil Within 2 you can find a bunch of weapons, which is especially surprising, since it is a game about survival. In the beginning, you will only have a gun. Do not think that if this is the first weapon, then it is the weakest. No, the pistol is a pistol and it performs its role for one hundred percent: a couple of shots in the head of a foe and he is ready. However, what about the rest of the weapons?

Well, all weapons in the game have their purpose: one gun works well here, and the other – here. However, I still want to advise two copies that can help you out in most situations. We recommend that you use a shotgun and a sniper rifle. Why them? The whole point is that the opponents will constantly try to get close to you as close as possible to tear off a piece of boring from you. Here comes the rescue shotgun, which is ideal for close distances. If you still increase Firepower, the shotgun will become a weapon that destroys entire crowds.

Ok, why do you need a sniper rifle? Compared with the first part, The Evil Within 2 has much more open spaces, where you can move more or less freely. On these spaces, adversaries will be scattered, which can easily be killed from a sniper rifle. They settled somewhere in the bushes or behind the car and shoot the heads of the evil monsters.

For close combat – a shotgun, and for the long-range – a sniper rifle. For a shotgun, we recommend to improve Firepower and Recharge speed, and the rifle can not even be improved, since it has quite good characteristics. However, you can pump the “Hard Hand” skill in the Battle branch, which will help reduce the jitter in the sight. Accordingly, aiming with a sniper rifle will become much easier (especially for players on controllers).

Well, perhaps, you can still advise to try to hit the weak points of opponents. Accordingly, more or less anthropomorphic enemies – this is the head (or part of it), while in others – the places highlighted in red. Shooting them, you can do the maximum damage.

The Evil Within 2 Guide: Melee Combat

If you compare the melee system to the first part, then The Evil Within 2 was able to improve the concept, and many times. The melee is now not a waste of time, but an adequate alternative to defend yourself. Quickly to kill someone in close combat is still difficult, but given the increased mobility of Sebastian – this is quite possible task.

In The Evil Within 2 we have at our disposal a real knife, which is the basic melee weapon and it appears when you press the melee attack button. No more clunky punches! If you run out of ammo, and on the tail of one annoying monster, then it is quite possible to kill him with a knife.

In addition, in The Evil Within 2 you can also find Axes that have a huge melee damage and are able to deal with most opponents with one hit. Once you find the Ax and pick it up, it will be a replacement for your knife, so be careful, otherwise you will spend such a precious thing on a weak opponent. Axes can be found in the hands of some monster, or simply lying or sticking out of someone.

The Evil Within 2 Guide: Best skills

But with the skills in The Evil Within 2 already more difficult, since almost all of them have their own benefit. We can recommend you only first of all to try to pump skills from the branches of Fight and Sneak. Why them? The thing is that with the initial skills from other branches you can quite well survive.

Bleeding some of the skills from Combat and Sneak can well be so easy for you to live and move around the world of the game as a whole. For example, in the Stealth branch, there is a skill called Ninja that will allow Sebastian to move in a hidden position more quickly. In addition to this, there is also the Stealth skill, which allows you to increase the total secretiveness of the character, as well as the Blow by the Bottle skill, which will allow you to escape from the grasping capture of the enemy if a bottle is in the inventory. In general, Sneak is a very useful branch.

The Battle branch will allow you to manage your armament more easily: to reduce the jittering of the sight, to reduce the kickback, to increase the damage in close combat, and so on. Unlike the first part, all these skills make sense to pump and improve immediately you feel.

However, we do not claim that all the other branches in The Evil Within are a waste of time. It’s just that the branches of Sneakiness and Fight attracted us most of all and they played a big role in many emergent situations in the game. It makes sense to pump all the branches, since they will form a unique style of passage for you.

Games #The Evil Within 2