HOWFIX.NET»Games»Far Cry 5 Guide: how to unlock the secret alternate ending

Far Cry 5 Guide: how to unlock the secret alternate ending

If you are fond of the Far Cry series, you should remember that in Far Cry 4 you can get an incredibly strange alternative ending. In fact, you should sit still in the chair when Peyan Ming asks you to wait for him. After about ten to fifteen minutes, Min will return to the main character and the game will be completed. Few people know about this ending, since no one wants to sit around without such an amount of time.

Nevertheless, let’s go back to the topic of this article – how to get an alternative ending in Far Cry 5. All right, in the new part of one of the most popular franchises of Ubisoft company there is also an alternative ending at the very beginning of the game. In this article, we will tell you in detail how to achieve the appearance of this ending.

How to get the alternative ending in Far Cry 5 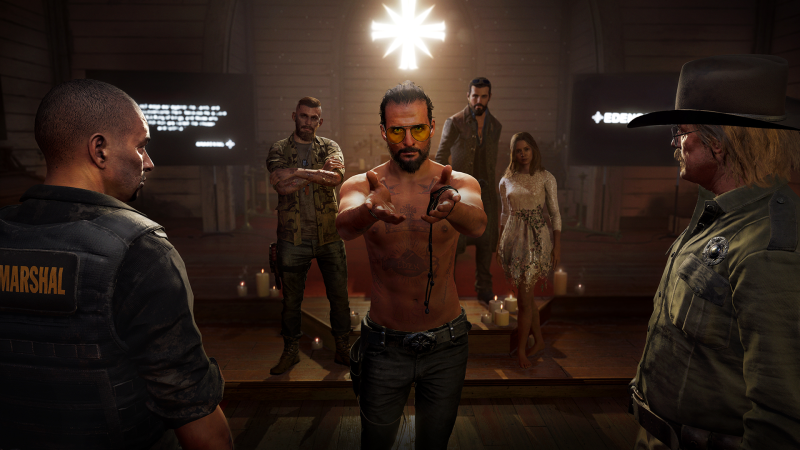 In fact, finishing Far Cry 5 in a relatively short time is an extremely simple task that some of you can perform even accidentally. The game begins in a helicopter: you are flying to the camp of Joseph Cid in Montana, in order to arrest members of the cult “Gate of Eden.”

So, get off the helicopter and follow the church with a warrant for Sid’s arrest, despite numerous warnings from the sheriff not to take such a step. Pass quietly into the church and let it begin a tense katstsentka, in which you will present an arrest warrant. Sid will stretch out his arms so you can put handcuffs on them – and then you will have the opportunity to see an alternative ending.

Instead of clicking on the action button – do not do anything. After doing this, your team will leave the territory of the cult “Gate of Eden” – and this game will be completed. As you can see, in the new part of Far Cry get another ending much easier and faster. Sometimes, it’s enough just not to do anything to get a reward.