Far Cry has always been one of the most popular games in the genre of shooters. Far Cry 5 has not changed its genre accessories – it is still a great shooter, which will fill your boring evenings of tonight fun. In this article, we will consider all sorts of game styles and armament Far Cry 5. 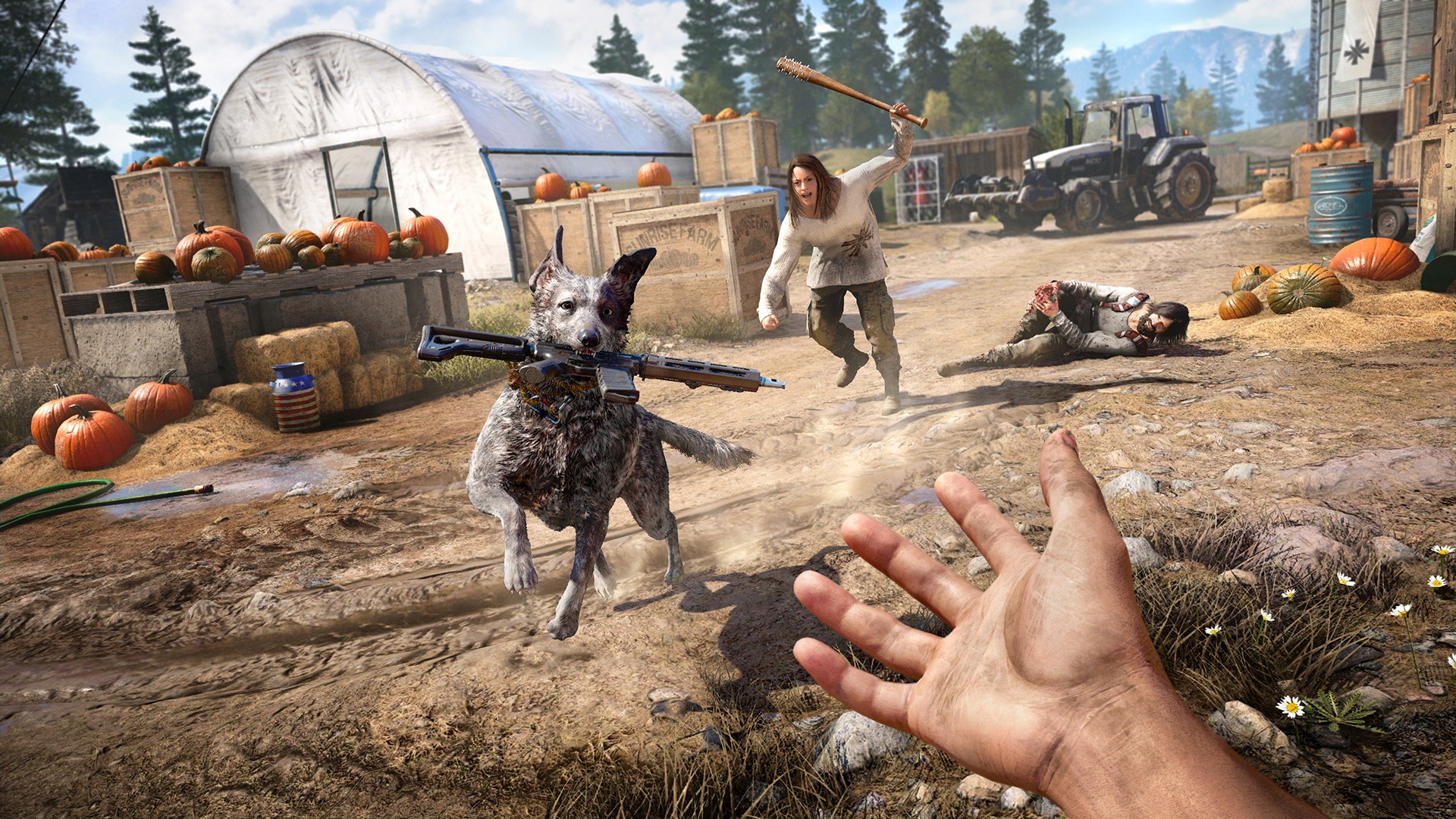 Despite the fact that Far Cry 5 positions itself as a shooter – in it you can find a bunch of different mechanics, able to help you in the fight against many enemies. For example, in Far Cry 5, the mechanics of secret killings and close combat is of great importance. In addition, the game also has an impressive arsenal of firearms. In general, in the county of Hope you will not be bored.

Some players prefer to get out of trouble by quiet – in Far Cry 5, you also have this feature. Picking up the enemy unnoticed, you can conduct a secret murder with a melee weapon. It is worth noting that you can even perform a secret murder if you are seen, but only in an extremely short time after detection. Among other things, you can also conduct secretive murders of heavily armored opponents, so do not be afraid to approach them from behind.

Of course, the mechanics of stealth can also be used to save cartridges. Did you notice that you have empty ammunition? It does not matter, in most situations you will be able to break through the opponents absolutely unnoticed. Track the degree of stealth you will help a special scale that appears next to your sight in the middle of the screen. In general, everything is quite convenient and simple.

Also do not forget that you can improve your abilities and gain the skill of secretly eliminating several opponents at a time, which will undoubtedly help you to come out victorious from rather difficult situations. In addition, when pumping skills will also increase the distance and implementation of the secret murder.

However, not all players are equally good at stealth. However, it is not worth worrying about, because you can go through the game and with a machine gun at the ready – complete freedom of action (within reason, of course). Sometimes, some part of the game is easier to pass secretly, but it’s up to you to decide.

If you played only in Far Cry 3 or Far Cry 4, then the next mechanic will be quite unexpected for you – in the fifth part of the franchise has finally appeared a real melee. The near battle in the series was born in Far Cry Primal, where you had to act out the role of primitive man. Accordingly, in those distant times firearms did not exist, so the developers had to enter into the game a lot of melee weapons.

All this mechanics migrated to Far Cry 5 – and now you can not only shoot from different guns, but also pound the skulls against opponents with shovels, sticks and pipes. It is enough to select, for example, a shovel, to choose it in the wheel of a weapon – and rushed. Among other things, a melee weapon will come in handy if you stealthily eliminate it, or to get close to the enemy.

Of course, you have the opportunity to pause melee to effectively deal with all sorts of enemies. We recommend that you aim at your head in order to do the maximum possible damage. A fairly good melee weapon is a bit with nails.

Far Cry 5 is a shooter. It is logical that in the game of this genre you have to spend a lot of time peering at the sight of your gun’s sight. In Far Cry 5 you can find literally a whole arsenal of various firearms: pistols, submachine guns, assault rifles, sniper rifles, grenade launchers, rocket launchers, flamethrowers and much more.

All these weapons you can safely personalize, as well as pump skills related to possession of weapons. Each gun is supplied with its own set of perks, for example, reduce recharge time, increase the amount of ammunition available, improve accuracy when shooting from the hip and the like.

In addition to the huge arsenal of firearms, in Far Cry 5 you will also be able to find all sorts of explosives that will help you deal with opponents in the cockpit of armored or air transport. For example, rocket launchers will perfectly cope with this task. Also in the game there is an explosive C4, with which you can create various traps for patrols or ambushes on the road.

Smoke bombs are another type of explosive present in the game. Of course, with the help of smoke bombs you can create for yourself a temporary shelter from enemy eyes. In general, very convenient and simple. About explosives – you need to remember two things about it: explosives can hurt you, exploding in close proximity to your location (it’s logical), and it has the property of quickly ending, so you have to craft it with the necessary materials.

Lures are extremely important items necessary for catching fish, as well as to attract the attention of some members of the cult of the Gate of Eden, which are pumped up with a drug Blag. Set the bait, wait for the opponent, who has left his group, and then get rid of him by secret murder. Here is one little trick: throw a bait for the cultist near some aggressive animal – they will start to fight with each other.

Also do not forget that in Far Cry 5 you have the opportunity to throw throwing knives at enemies. It is clear that such weapons are ideal for secretly removing enemies from a distance. And, throwing a knife in someone, you immediately get rid of it.

Throughout Hope County you will find many mortars installed, in most cases, on the outposts of the cult of the Gate of Eden. You need to be extremely careful when dealing with this weapon, since it can inflict an incredibly large amount of damage. As soon as you shoot from the mortar, you will see a flashing bomb icon on your screen, which serves as a warning of the imminent landing of the projectile at the point indicated earlier.

Stationary weapons are extremely effective against ground, water and flying equipment. This weapon has infinite ammunition, but they can overheat extremely quickly. If you saw the enemy for some of the stationary guns – get rid of him the very first, otherwise it will bring you a lot of problems in the future.

On aircraft, you have access to powerful machine guns, rockets and bombs, with which you can arrange a real hell. Let on the ground will be with a dozen different enemies – for a stationary gun on a helicopter or an airplane you have nothing to fear. However, do not forget that some members of the cult can carry rocket launchers or grenade launchers, which, of course, poses a threat to your aircraft.

A lot of players underestimate this handy device. Using binoculars, you can mark opponents on the battlefield, which will definitely facilitate your task of eliminating them, since after marking you can see their outlines even through walls. The binoculars will prove useful when cleaning out enemy outposts: climb to the hill, mark all enemies with binoculars to get a tactical advantage.