When installing or loading Windows, the error stop appears 0x0000007b

Windows operating system is the most common in the world. Millions of personal computers and server machines are running this system. Malfunctions of a software product can paralyze entire enterprises, home PCs are no exception.

OS from the beginning of its development to the most recent releases has a built-in error reporting function. Each error consists of an alphanumeric code and a brief description of the problem. All errors that have been initialized by the system and are described on the official support site.

Most system errors usually result in Blue Screen of Death (BSoD). Many users, meeting with an error called “blue screen of death”, think that this is a slang expression. In fact, this is a literal translation, and the reduction is approved by Microsoft itself.

One of the most common errors is the failure to initialize the hard disk of the computer, the error has the code – 0x0000007b . This is a typical stop – an error in which there is a system that terminates workflows and requires a reboot. In earlier versions of the OS, it was possible to restart the computer only manually or with the help of hot keys. More modern versions include a timer and reboot automatically. 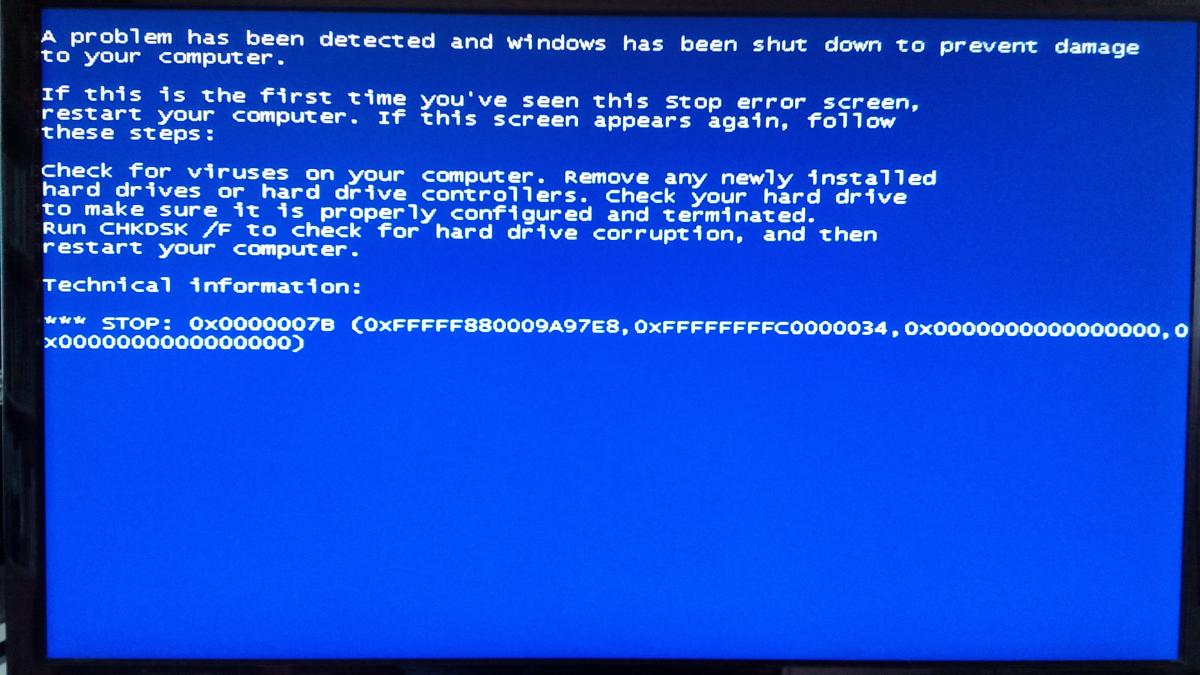 There are quite a few reasons for signaling the system error. We will try to designate them all and structure them. Many consider the error only a system failure and do not attach importance to the technical component. But experience shows that a large number of problems are caused at the hardware level of building computers. From them, you can begin to list the possible failures in which the error 0x0000007b occurs

One of the common causes of a system crash is the presence of poor quality data signal link connections. Particularly affected by this are the so-called work PCs, where very often hard drives are connected and replaced. This is also true for servers. Conditions for such use are subject to the segment where it is needed. An example is computers for video surveillance. The policy of their use often involves replacing hard drives when filling out the necessary information. A side effect is the loosening of the socket connections of the cables, as a result of this contact disturbance, an error 0x0000007b is possible .

Poor power to the hard drive may cause this failure. Over time, the power supply at full load changes its output characteristics. This is due to the schematics of pulse power supplies. Since at their output in the secondary circuits installed electrolytic polar capacitors. At medium load, the electrolyte may dry out. Therefore, there is a failure of power given to consumers. Not receiving the necessary power to complete the work, the hard disk of the computer can provoke a system error message.

Each HDD has a working resource, declared by the manufacturer. After using the guaranteed performance possible failures. The aging of magnetic disks can provoke the appearance of bad sectors. Such sectors are poorly readable or access time increases. The kinematics of the disk is subject to wear, and, as a result, inaccurate positioning of magnetic heads over readable sectors.

The above reasons for issuing a disk initialization error are hardware and are related to technical malfunctions. Now about issuing errors at the software level.

A driver is software whose purpose is to coordinate the electronic components of a computer with the operating system services responsible for connecting devices. BsoD 0x0000007b error can be caused by failures in the driver code or the lack of necessary files in its composition. By default, the operating system windose contains device drivers, but to older drivers are no new devices to the system. In this case, when installing the system may require a disc from the manufacturer with the software. For example, the error 0x0000007b wind ows XP occurs is quite common, since the system no longer supports many hard drives.

The boot area and hard drive layout can be damaged. This is due to incorrect user actions, but may also be a consequence of the activity of viruses. MRB contains information about disk partitions, their format and structure. Damage to the boot area causes the impossibility of “catching” the initial initialization loader. Such software damage may cause the blue screen 0x0000007b .

The computer BIOS provides several modes of hard drives. The most common interface protocols are Standart IDE, AHSI, and RAID. Standart IDE protocol is outdated, but in almost all manufacturers of BIOS it is installed by default. But today, the Serial ATA interface is the most common, and its higher speed ensures operation with the AHSI protocol. When installing a SATA hard disk, but using the IDE protocol, the disk will be emulated, and this reduction in speed to the rate of the outdated Standart IDE. But the main problem is that if you install the system on the HDD in AHSI mode and then reset the BIOS settings to factory defaults, the error 0x0000007b will be initialized. Resetting the settings can occur as a result of incorrect user intervention, and from a technical failure. It doesn’t matter how the settings were reset, a boot error will be present. Connecting a hard disk as a RAID is not common on user computers. This is an array of several hard drives used in server configurations, but errors are also relevant to them.

The order of presentation of the article can be guided by the same sequence as in the description of the causes of the error 0x0000007b.