The Elder Scrolls: Legends’ previous Monthly cards often presented complex deckbuilding challenges. They are cards with high potential, but require some work to maximize their power. Today, we are revealing a different type of Monthly. Stampede Sentinel doesn’t much care what type of deck you put him in.

He will smash things. 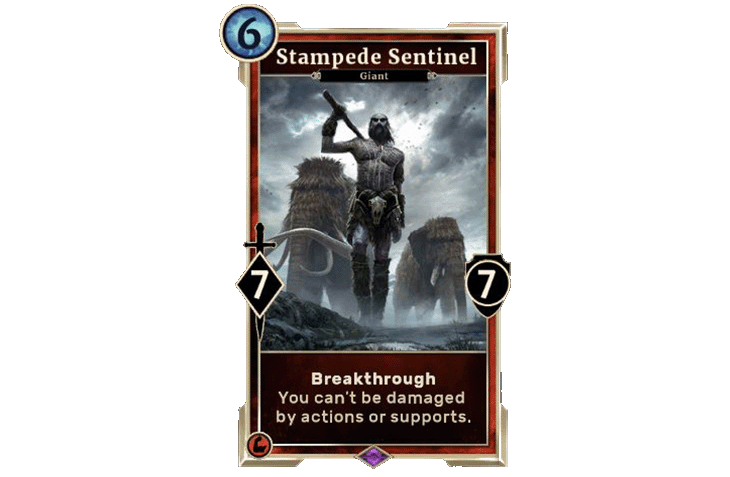 The first thing you notice when looking at Stampeding Sentinel are his cost and stats. Six magicka 7/7s don’t come around very often. Breakthrough means he can take out smaller creatures while applying pressure to your opponent. His second ability offers a whole lot more.

Stampede Sentinel will stop damage from a variety of effects, which is perfect for a slower Strength deck. Strength has no health gain, so this will help shore up one of its major weaknesses. Stampeding Sentinel will crush many a player underfoot, along with his Belligerent and Vigilant Giant buddies. While Stampede Sentinel is mostly just a powerful card, it does have some synergy. For example, a friendly Gladiator Arena won’t hit you with a Sentinel out.

The Sentinel is particularly well-suited at fighting Prophecy Battlemage, one of the most popular decks on the ladder right now. His ability stops Dark Rift, Gladiator Arena, Lightning Bolt and Crushing Blow from hitting you in the face.