The audio section has been a part of the social network practically since the beginning of VK’s existence. Unlike other music services, VK users not only have the possibility to upload music without any restrictions, but they can share music with friends. This became the secret to success. VK united people with diverse music preferences, gave them the ability to converse, create themed communities, search for rare tracks and distribute beloved music without limitation.

Due to VK music, thousands of new artists in Russia and the CIS countries became popular, such as the famous Noize MC, Max Korzh, Oxxxymiron, Jah Khalib and many others. Tens of thousands of music communities appeared, and their creators learned to make outstanding music collections that worked better than any recommendation systems.

Since the music service launched though, it has not undergone any changes. It has always remained as simple as possible, which solved the main task of providing the ability to listen and find favorite music. Now in VK it is possible to find practically everything from popular singles to niche underground music. With absolute certainty, we can call VK’s music library the largest in the world.

Music is an essential part of the VK user experience. Today we are launching a completely updated service and beginning a new stage of its development.

The most noticeable change is the clean design with improved navigation.

Most tracks have their own cover image that is automatically created according to data collected from search systems and open sources. 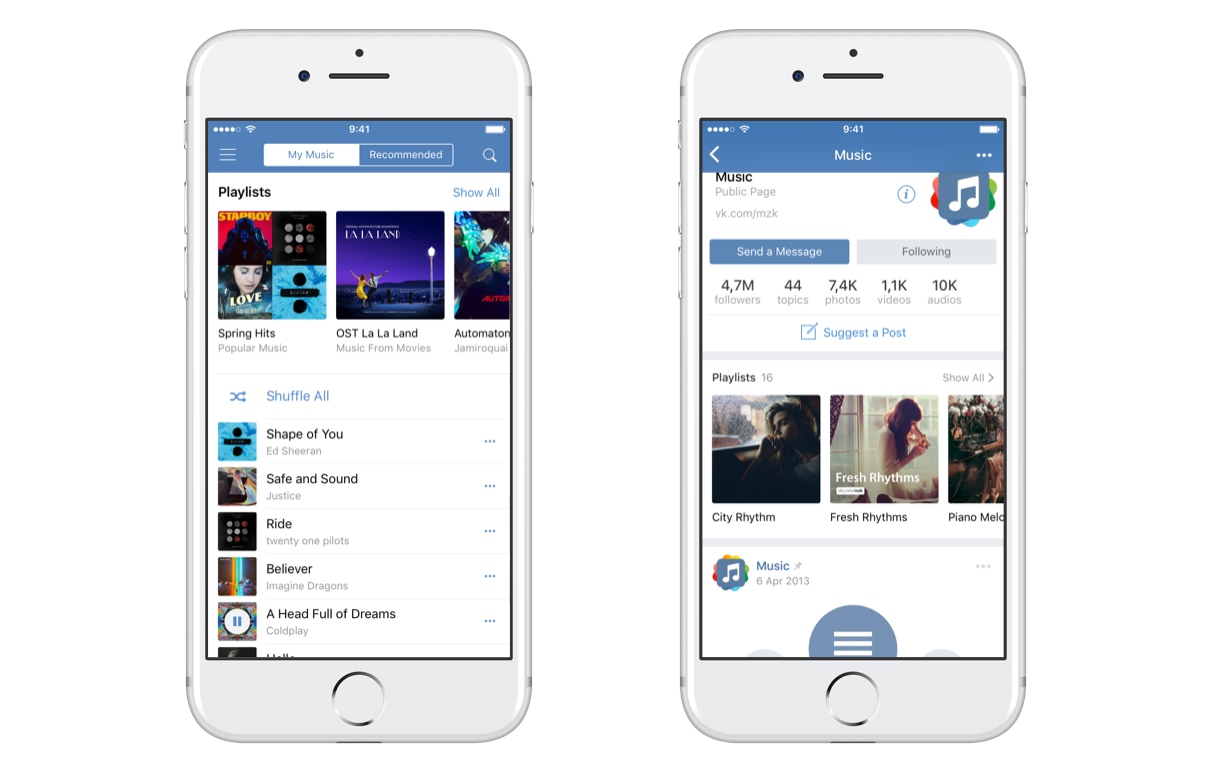 The new audio section is based on playlists that can sort music lists of any size. Add favorite songs, group them into playlists and add a playlist cover and description. To have more freedom of choice, one track can be added immediately to several playlists.

Unlike old “albums”, a playlist can be added to your music with one click. It can also be attached to a wall post or sent via message. No longer will you be limited to ten attachments as playlists may contain hundreds of songs. 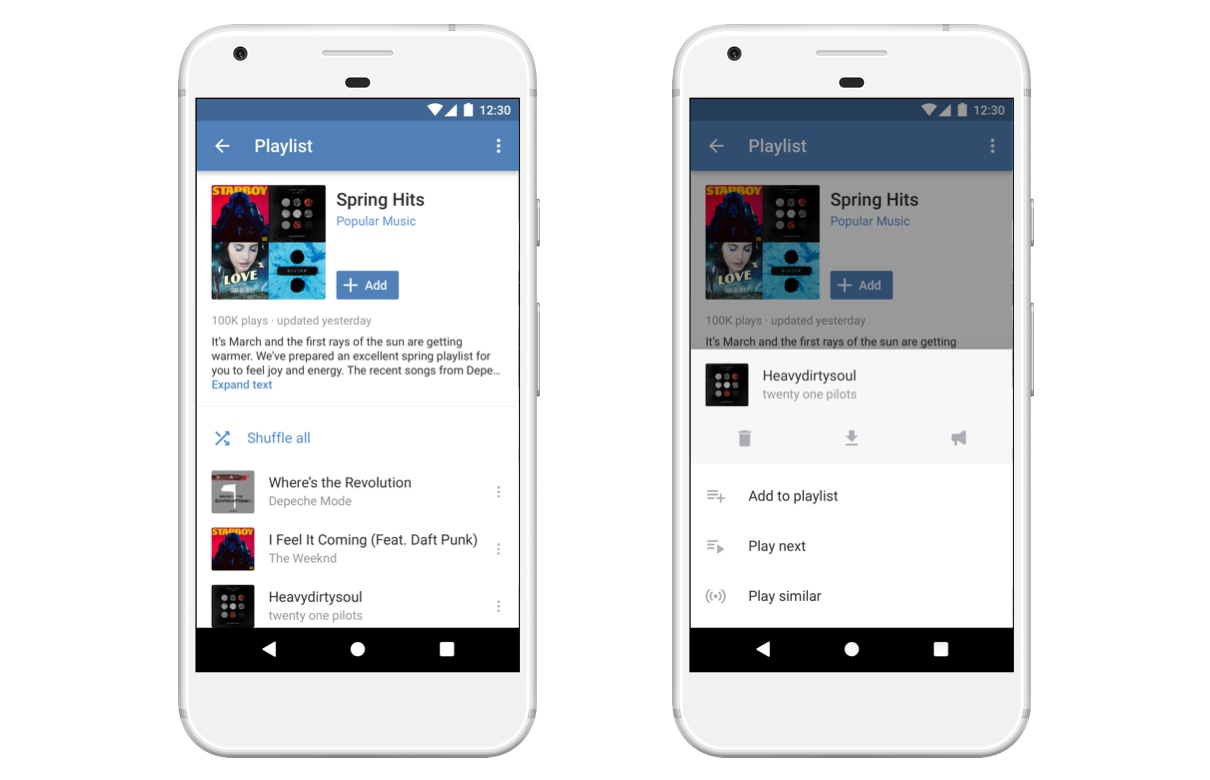 Share good music and everyone who likes your playlist can subscribed to it and follow updates. To evaluate the popularity of your music collection easier, we added a counter of views and plays.

A playlist can be included into recommendations and make everyone’s day. They will get good music and you will get new followers, fame and likes.

We have given the section update serious consideration, so that you can discover for yourself new singers, without changing your musical tastes. Besides recommended music, many new collections will appear such as new songs, upcoming singers, music community playlists, your friends and general recommendations. 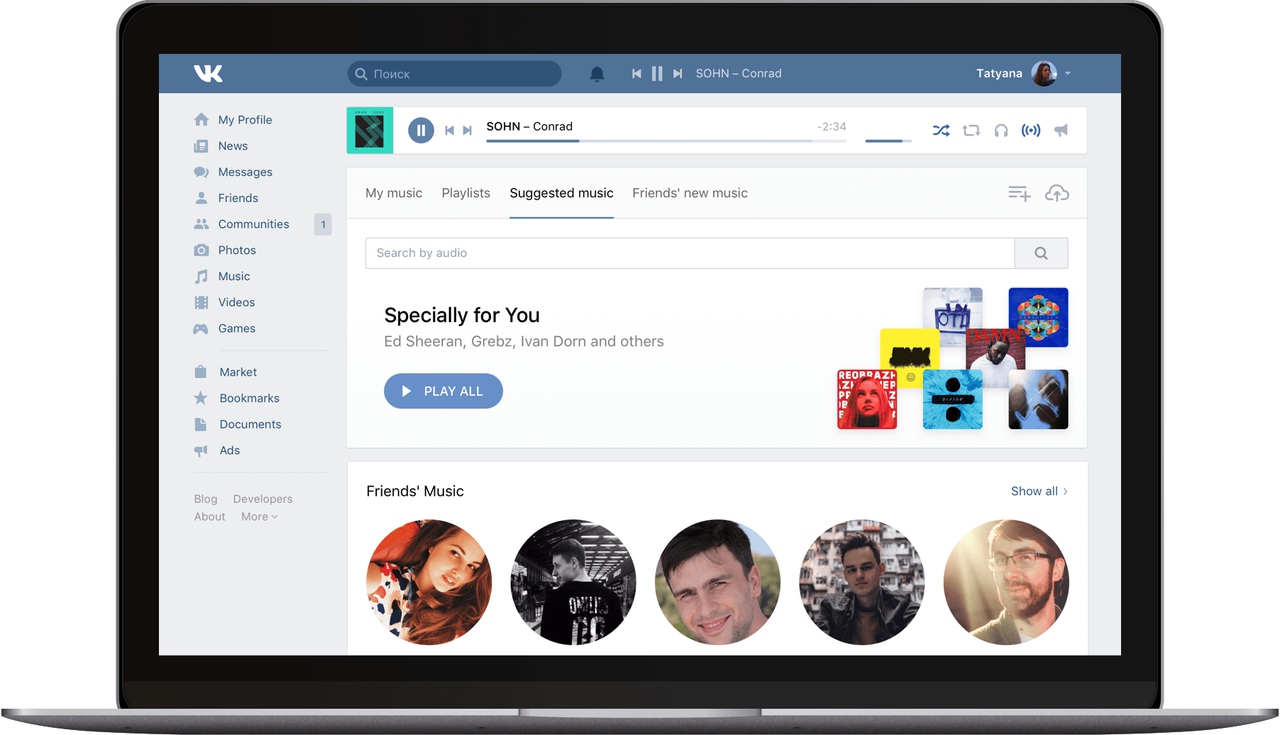 VK has always had lots of good music, and we have done everything to make it easier to find. And the recently listened music list will help to not lose what has already been found.

Due to the partnership with the biggest international labels, many more official pages of world-class musicians will appear in VK. VK users can be amongst the first to review releases from popular performers, including albums, singles and clips. For new musicians, we have made a special section that will help them find fans.